Hedgehog Goes to the Gym: the Kickboxing Adventure

Posted on September 14, 2018 by executionhedgehog

The last few posts I’ve made have been kinda serious, so now it’s time for something more lighthearted. I went digging through all my unpublished drafts and stumbled upon this one. I started writing it over two years ago, and then for some reason forgot about it. Here are some Hedgehog thoughts from late spring in 2016.

When I was 10 my parents put me in Tae Kwon Do. I loved it, but I stopped when I started doing sports at my middle school and haven’t picked it up since.

As a woman of roughly average height, most people in the world are bigger and stronger than me. Even though I have a black belt in Tae Kwon Do, I was twelve when I got it (I think they were being nice). I don’t think that will help me if I get attacked in a parking lot tomorrow.

After doing some googling, I found a gym in my area that lets you take a class for free without a membership. 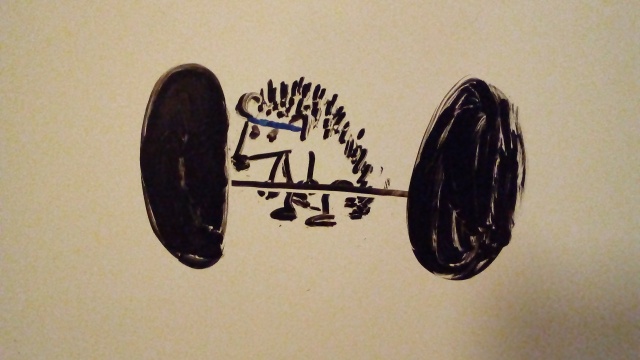 Here is a doodle to illustrate how motivated I felt.

I called and found out that, while most of their classes took place when I was at work, there was a kickboxing class that fit into my schedule. I signed up, thinking that, at the very least, I’d come out of there slightly better at punching people.

For the warm-up, we had to run around the building for 15 minutes while carrying two weights. At first I was ok with this. I like running. I get itchy if I go too long without a good run. I normally run at sunset, listening to music and going at a comfortable pace while I enjoy the solitude. It’s very peaceful.

I do not like to run while dragging weights through the desert in the middle of the day and a beefy guy is yelling at me to run faster. This was a different beast.

By the time the run (at least, that’s what the instructor called it. I called it cruel and unusual punishment) was over, I was sunburned and convinced that my arms were going to fall off.

“Great job!” He said, with all the infuriating enthusiasm of a person who spends 90 percent of his time at the gym. “Now we can start warming up.”

Inside the gym there was a weight-lifting section and a boxing ring off to the side, but most of the space was dominated by a forest of punching bags. After some warm-up squats and warm-up lunges that nearly killed me, the instructor put us into pairs and had us take turns bear-crawling between the bags. We were supposed to drop and do five push-ups at every bag, and when the first person reached the other end of the gym, the next person was supposed to go.

The instructor put me with another girl who was new to the class, which meant that both of us were totally out of shape, and all the other teams had people (men) who were basically professionals at doing push-ups in a gym. After I reached the second bag, my arms were shaking. In the time it took me to cross the gym, the other teams had already gone through twice.

When I finally got to the other side, my partner took about the same amount of time as I did. If I had been able to use my arms, it would have been nice to read a book while I waited for my turn. As it were, all I could think was, “I am going to die here.”

The rest of the class consisted of running between the bags, punching and kicking as we went. That part was ok, but we didn’t seem to do it for very long.

At the very end of the punching and kicking session, the instructor got really enthusiastic.”Now, knock ’em out!” He yelled, demonstrating with a heavy punch that sent the bag swinging on its chain.

You gotta be kidding me, I thought. I might as well be flinging a pair of wet noodles at this punching bag. I have no business trying to knock anyone out.

After about seven years of me helplessly flailing at the bag, the instructor made us stop. Now we were supposed to do a nice relaxing, very intense series of crunches to cool down for the end of class. Both me and the other girl were dying at this point, but she had a strategy. Every time the instructor came close, she would make a big show of doing crunches as fast as she could, and as soon as he turned away she would stop and sprawl out on the floor, gasping for air.

This seemed distasteful and dishonest to me. I thought, “I’m not here to impress anyone. I’ll stop whenever the fuck I wanna stop, no matter who sees me.”

She was smarter than I was.

The instructor inevitably noticed that I was slowing down, and he thought the best way to encourage me was to stand over me and yell, “You have 15 seconds left! Don’t stop! DO NOT STOP!” I glared right back at him and stopped about three seconds later. Yell at me again, asshole.

He kept yelling at me not to stop (while I stubbornly kept stopping) until the time ran out. Then he wandered away to yell at someone else for the next round. I think I frustrated him.

When the class ended, I went to get my water bottle and pretty much melted into a puddle on the floor. I sat there and leaned against the wall, thinking this is probably what it feels like to be roadkill. I dimly remembered that I still had to go to work today.

What I learned from taking one free kickboxing class:

If I get attacked in a parking lot, I should do five push-ups and then bear-crawl away. If my attacker is not impressed, then I should roll over and do crunches until he wanders off.

This entry was posted in Shenanigans. Bookmark the permalink.

TIME TO REGISTER TO VOTE

We Are the Mutants
Rapt Cat

AS I TOLD THE GIRL THAT I LOST MY VIRGINITY TO, THANKS FOR LAUGHING AT ME HERE TODAY.

The goings-on of this twenty-something in South America

Rubber Shoes in Hell
Taking Sense Away
You Monsters Are People.
Aussa Lorens

A Collection of Musings

A funny outlook on everyday issues

Read by four out of five drunken monkeys, written by the fifth.

Becky says things about things and other things

The misadventures, daring exploits, and tragic triple dog dares of a classy girl in her 20s